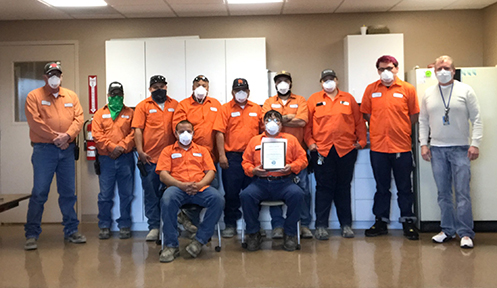 On April 24, 2020, Jose Guadalupe Prieto-Dorado, who most simply know as Lupe, retired after 17 years with the City.

Lupe has been a resident of the Wendover area for 46 years along with his wife Graciela.  Lupe has 3 children and one grandchild.  Lupe started coming to Wendover in 1968 while working for Southern Pacific Railroad. In 1974 he started working for the StateLine Hotel and Casino in the Porter Department and there he quickly was promoted to supervisor, which he worked for 29 years. In 2003 Lupe started working for the City where he was hired as the lead Janitor maintaining to the highest standards over six building facilities the past 17 years.

Lupe is well liked by all employees and deservedly so.  He has always been willing to help out, always wore a smile and never complained while always going the extra mile to get the job done... the right way. His dedication and commitment to his work and the City will not be unsurpassed.

Lupe received a service plaque commemorating his years with the City by City Manager Chris Melville who stated, "I have known Lupe since I was a kid, when he first arrived in the community and the entire time he has been an outstanding worker no matter what the job and above all else a great friend.   The City was really blessed to have him as part of our team and we will definitely miss him.  In gathering for his retirement send off it was a bit of a unique situation, all of us wearing face coverings as part of the COVID-19 safety measures, but then again, Lupe was a unique man."

We wish you and your wife Graciela the best in your retirement Lupe, we will miss you!

Your friends at the City of West Wendover.

Pictured is Lupe (seated right) with his commemorative plaque, surrounded by fellow staff of the City